News & Media
Labor must learn China is not going away


One of the toughest challenges for new governments is foreign policy. Stuff
happens from the day of the election and the prime minister and new
ministers are forced to respond.
Unlike domestic issues, governments can exercise little or no control over 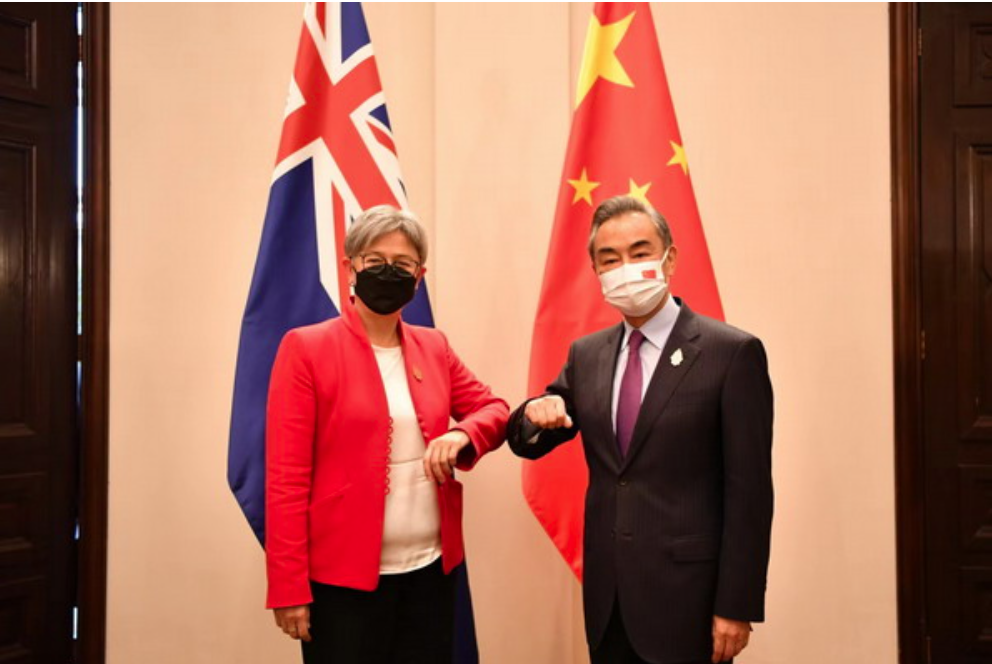 Foreign ministers Penny Wong and Wang Yi met in Bali during a G20 summit. Johannes Christo
Both the new Prime Minister Anthony Albanese and Foreign Minister Penny
Wong have been busy. Not that they have had to deal with crises so far –
Russian invaded Ukraine five months ago – nor unexpected events, Chinaʼs
embrace of the western Pacific has been years in the making, but a raft of
scheduled international meetings has put a spotlight on foreign policy.
Wong has begun well. Her approach is considered, calm, thoughtful and
workman-like.
Importantly, she has deliberately eschewed exaggerated rhetoric. She has
also introduced a new concept into foreign policy.
In her first speech as minister she said that Australian foreign policy should
be based on Australiaʼs Indigenous heritage and its multicultural society.
This has not received the attention it deserves. It provides a foundation for
defining over time a more independent foreign policy than governments
have pursued since Paul Keating.
Wong has had years to prepare for this role in opposition. It shows to good
effect.
Coming to this job, which requires nuance, careful preparation, and a
particular temperament, is not easy. The minister needs to be able to think
about the issues for herself, or himself. It is not enough just to regurgitate
departmental talking points, as her predecessor did, and not very well at
that.
Not so for Albanese. Understandably, he shows little preparation or
independence of thought from his advisers. He was busy thinking about
getting elected.
Laborʼs strategy was not to have a crack of light between it and the
government on foreign and security policy, so no need to think about these
things. Close your eyes and adjust the accent slightly and you hear Scott
Morrison. For Albanese, there was no need for his advisers to re-type the
page, and they didnʼt.
Fortunately, the Prime Ministerʼs Morrisonian intoning in Tokyo and Madrid
about Chinaʼs threat to our values and that China had changed, not Australia
(as if we both hadnʼt), did not derail – as it easily could have – last weekʼs
meeting between Wong and Chinese Foreign Minister Wang Yi.
Wongʼs debriefing of the media afterwards was first class. As was her
assessment of where to from here in the bilateral relationship.
Finally, after years of no contact, a senior Australian minister was able to
raise the plight of Australian detainees in Chinese prisons.
Diplomatic engagement with other countries is about much more than trade
or the state of bilateral exchanges, or co-ordination on regional and
multilateral issues. It is also critical with countries such as China to protect
and defend the welfare of Australian citizens that become consular cases.

have been wanting. It has been left in the dust of great power


Morrison had made Australia an outlier in relations with China. Even Canada
maintained high-level official contact, which eventually led to the release
from Chinese prisons of two detainees. At this stage, the meeting should
not raise hopes for the Australians, but it is much better than nothing.
The fawning attention given in the Australian media to all the diplomatic
activity over the past two weeks seems to have deflected attention from
some other important events with potentially significant implications for
Australia.
Chinese Vice-Premier Liu He and US Treasury Secretary Janet Yellen met to
discuss the removal of US tariffs. While doing little to tame US inflationary
pressures, removal of the unilaterally imposed tariffs would provide a
potential face-saving way back towards more constructive relations.
This was followed by a five-hour meeting of Chinaʼs Foreign Minister and
US Secretary of State in Bali at the weekend.
The tempo of engagement at senior levels between the US and China is
ramping up. Strategic competition wonʼt disappear, but the relationship
might become less fractious, more co-operative.
Other than a potential nuclear war, the US has no choice but to share East
Asia hegemony with China.
The Indo-Pacific as a security system has proved as vacuous as its name
implies.
India put an end to that when it refused to condemn Russiaʼs invasion of
Ukraine. It then went on to continue its arms, energy and agricultural trade,
while helping Russia find ways of circumventing Western financial
sanctions. India merrily participated in the China-led BRICs summit, along
with Russian President Vladimir Putin.
Australian foreign policy of the past decade can now be seen to have been
wanting. It has been left in the dust of great power rivalry.
Australiaʼs bit-part in the drama has damaged the country, while not
ensuring US continued hegemony in our region. Chinaʼs presence in the
western Pacific is a monument to this failure. We have not been able to exert
influence in the region in which we most aspire to do so.
This is not about the micro detail of aid programs, or how many times an
Australian prime minister or foreign minister visited the region, or our
policies on climate change. It is about great power rivalry.
Our bet has been entirely on the US which, with multiple global distractions,
a deeply divided politics, and flagging will, has been unable to compete in
the region of closest strategic interest to Australia.
This is not to welcome the changes, but to recognise the reality. China is not
going away.
China does not threaten the security of the US mainland, or indeed the
Western Hemisphere, although it has outplayed the US diplomatically in the
USʼs own sphere of influence for years. Little support was garnered in
Central and Latin America to condemn Russiaʼs invasion of Ukraine.
In Madrid, the country of Cervantes, we had the spectacle of Don Quixote
and his squire Sancho Panza tilting at windmills, trying to convince others
that the world is not cast as it is.
At the same time, we had the prime ministers of Belgium and the
Netherlands warning that China is not an enemy of Europe. And warning
that equating China with Russia, as Albanese did, was not only a mistake,
but potentially harmful.

Until Albanese changes the advisers who have taken Australia into these
policy dead ends, he will continue to cut a quixotic figure on the world stage.
Worse, he will run the risk that as China and the US recalibrate their
relations, Australia will be left like a shag on a rock, and our security
seriously unattended.